Why do consumers find the coffee from convenience stores to be so delicious? Coca-Cola Japan, which is currently working to revitalize its cup vending machine coffee, partnered with INTAGE to derive a number of innovative discoveries with respect to subjects that had previously been difficult to put into words. This knowledge was highly praised by the Coca-Cola Company as a whole, and also achieved remarkable accomplishments such as winning the Best Presentation Award at the ESOMAR Asia Pacific conference.(*) We spoke with Junichi Ichiba from Coca-Cola Japan, who was a central figure in this project, about this sequence of initiatives.

(*) ESOMAR Asia Pacific: This is a regional conference for the Asia / Pacific region sponsored by ESOMAR, a global market survey organization. 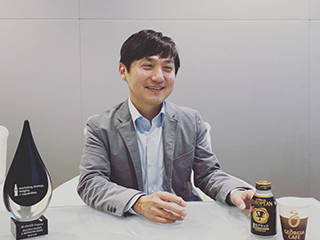 Could you please start by discussing your company’s business challenges that formed the backdrop to this project?

Around 2013, coffee that was sold at the counters of major convenience stores took the market by storm. In addition, from even before that the opportunities to purchase coffee at convenience stores and super drugstores had been rising year by year. This significantly impacted our existing businesses. So revitalizing our cup coffee became one of our challenges.

The coffee in cup vending machines is regular coffee that has been brewed, correct?

Do you mean to say that even though you had some understanding, you weren’t able to explain why this was so?

Exactly. So therefore we planned to perform a survey, but right from the very beginning we didn’t have a great idea of what we should inquire into or in what manner. Thinking on it now, I feel that it’s almost impossible to successfully inquire into the unspoken assumptions held by the majority of people. When we posed the question: “Why don’t you buy coffee from cup vending machines?” the people we asked were unable to provide clear answers.

It certainly seems like it is difficult for people to find clear-cut language to express themselves.

Therefore, we consulted with Tanaka at INTAGE over our vague suspicions that we had yet to arrive at solid business questions in this manner. She proposed a number of techniques and processes to us, one of which was the Sensitive Differentiation Method (SDM) (Fig. 1). 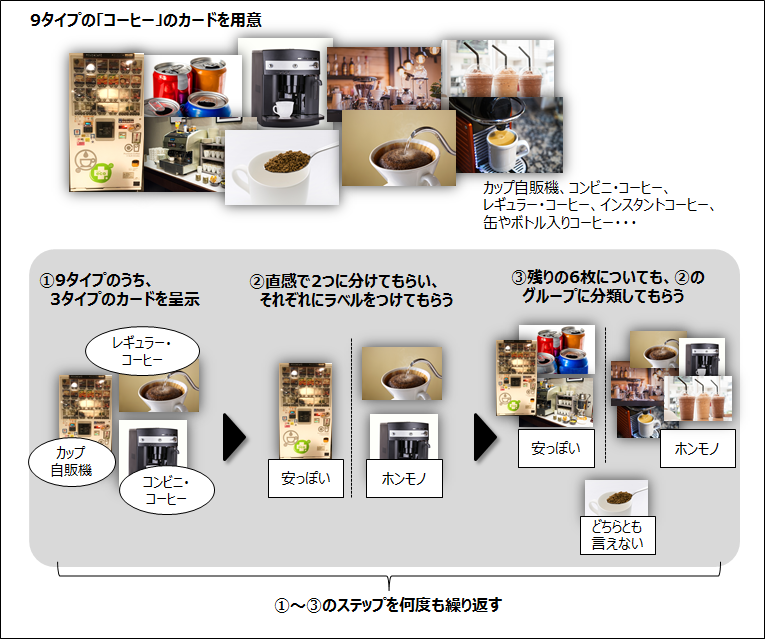 What sort of impression did you have when you tried using it?

As I mentioned before, it is difficult to take things that we consider obvious or common sense and put them into words. Most of the customers just said they sort of tend to buy it because it tastes good, but they weren’t necessarily able to readily verbalize their reasons for this in a logical manner. So rather than approaching this linguistically, we adopted a method of eliciting answers from their instinctive behavior (by sorting out cards) and using this to decode their subconscious, indistinct logic. I thought this approach was simply outstanding.

I see. So what sorts of components of delicious coffee were you able to decode from the SDM?

The most important factor was brewing the coffee on the spot to allow customers to experience it personally. Let them see and hear the coffee brewing process, and experience the aromas. To put this another way, cup vending machines up until that point had been machines where coffee would be dispensed with a beeping sound from out of a black box they couldn’t see into. As a result, we realized that customers harbored negative feelings towards this that made them wonder what was going on inside. In the same sense, it’s important that the machine not be very vending machine-like at all. Boxy vending machines give people the impression that they contain industrial goods for some reason. People tend to think this even if the coffee is brewed there on the spot.

Following this, consumers also have a desire to personally participate in the coffee brewing process. This includes tasks like having them set the cup down themselves, and add the ice, sugar, and milk. This probably isn’t limited to coffee. For example, I feel that this is similar to how consumers feel that food tastes better with something that is halfway prepared where they have to add in a few personal touches themselves, rather than buying ready-made foods that are fully prepared. Then the last element was the size of the cup vending machines. If they were too large, then this tended to result in negative impressions that they were suspicious-looking or untrustworthy, for example.

So we discovered four elements that make for delicious coffee via the SDM. These are: Having customers personally experience this with their senses on the spot, having them personally participate in the coffee brewing process, ensuring the machines were not very vending machine-like, and dispelling negative feelings from what was going on inside these black boxes they couldn’t see into.

This is an absolutely fascinating discussion.

I felt that these were important discoveries when I first heard about them. Tanaka was the one who made progress on our behalf with the actual task of categorizing the numerous words that emerged from the survey respondents to elicit their responses.

Moreover, we surveyed the optimal shape and construction of cup vending machines to provide delicious coffee. To do this, instead of using conventional prototypes, Tanaka told us of an approach of using virtualization technology to recreate store shelves called a “virtual shelf,” and also arranged this for us to use (Fig. 2). 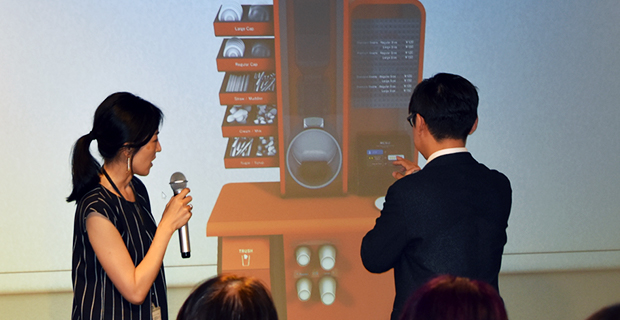 You’ve stated that this is a virtual prototype. What sorts of advantages did it offer?

Normally, expenses on the order of tens of millions of yen would be required to build a vending machine prototype, and they are time consuming to produce. As a result, up until now we would only make prototypes after first narrowing the focus down. However, this approach allowed us to perform quality surveys similar to those that used conventional vending machines at around one-third the cost and production time. This was a major advantage. Since we could test a greater number of vending machines, we were actually able to obtain some of our ideas for new cup vending machines in this manner.

You’ve mentioned Ms. Tanaka from INTAGE in your comments. Did she continue to provide support throughout the entire duration of the project?

That’s right. This project was launched in 2014, and she has been with us since the very beginning for nearly three years now. The project itself wrapped up after about two years, but even after that she recently gave us her cooperation for ESOMAR.

Did the high praise that the project results received within the company motivated you to enter it in ESOMAR?

Every year, my company holds a global conference where we share our knowledge, anecdotes, and experiences. When we submitted this recent project as one of the lessons, we were among those given the opportunity to present from among the many lessons from different countries.

Moreover, at the same time our company participates in ESOMAR every year, and so we decided to enter this. Nonetheless, this placed a heavy burden on me personally, and so Ms. Tanaka and others at INTAGE gave me their cooperation for this. Thanks to them, after winning the Best Presentation Award at the ESOMAR Asia Pacific conference, we were fortunate to have the opportunity to take the stage at ESOMAR Congress, which is the largest conference in the world sponsored by ESOMAR. It just so happened that the theme of this ESOMAR event was “Discovery,” so perhaps it was just good timing.

As such, our presentation was also selected for first place at Coca-Cola’s global sharing (shared learning).

It was certainly a sweeping victory. In a certain sense, the components of delicious coffee are universal, are they not?

I feel that this knowledge is not limited just to coffee, but can be applied to a variety of different goods. By deeply probing the “Why” behind consumer’s behavior, we were able to arrive at some fundamental answers. I feel that this is conducive to arriving at curative solutions to problems, rather than just stopgap measures for treating the symptoms.

You incorporated innovations into your new cup vending machines like making them see-through, allowing the aroma to escape, and stimulating the senses, and learned that there is a precise meaning behind each and every feature.

Humans are moved by our emotions, and ultimately it is our emotions that lead us to choose a coffee as well. An innumerable number of surveys have been carried out on these sorts of human behaviors, and INTAGE is home to people with a great deal of experience and knowledge on this. In this case, I feel that this dovetailed perfectly with the business challenge faced by our company, and serves as an excellent example that resulted in great work.

Please let us know if you have any requests or the like for INTAGE.

When it comes to marketing surveys, the amount that can be accomplished on the manufacturers’ side is gradually increasing, even for those who lack a considerable degree of expert knowledge or experience. However, the reason that this project was a success is thanks to the cooperation that INTAGE provided in a specialized field that we didn’t understand on our own.
While this probably holds true for every industry, the beverage industry is one where you must be in a constant state of change. Because if you stand still, you’ll quickly find yourself left behind in the dust. In order to discover the next popular beverage, I would like to continue working together with the people at INTAGE to discover and cultivate the seeds for innovation and figure out business questions. 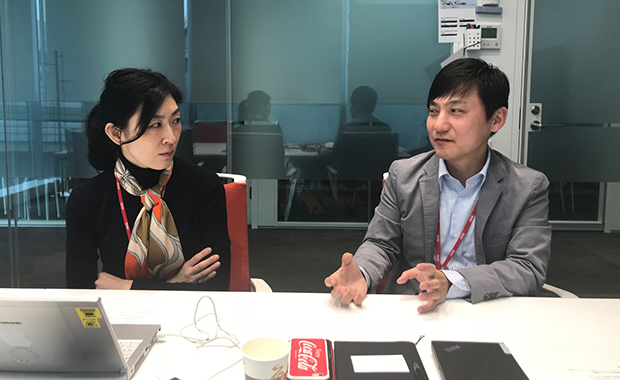 Mr. Ichiba from Coca-Cola (Japan) Company,Limited and Ms. Yuki Tanaka (left side of the photo), a Sales Analyst / Manager at INTAGE Inc.

Thank you very much.