Vietnam has a higher percentage female labor force, compared to that of other countries in Asia. Double-income couples/families are very common in Vietnam. Young women (especially in their 20s) have strong influence on purchasing products and services for a whole family. Accordingly, young female consumers can be described as essential targets in Vietnamese markets. 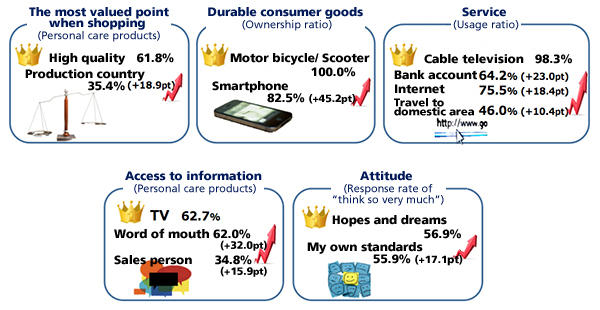 Survey results clarifies that women in their 20s in Ho Chi Minh City put the most importance on ’high quality’ when shopping. Also, the choice ’production country’ has the biggest increase, compared to the results of the previous survey in 2012. This could be interpreted as their necessity for safety of products, for Vietnamese markets often suffer from counterfeit products.

Women in their 20s in Ho Chi Minh City put the largest importance on ’hopes and dream’ when it comes to ’attitude’. Also the choice ’my own standards’ has the biggest increase, compared to the results in 2012. Vietnamese consumers used to have very limited range of products and services. Generally speaking, Vietnamese women had tendency to choose products and services with much stress on family. Today, younger women have tendency to choose products and services suitable rather for their own lifestyle and individual needs, mainly due to higher life standard and increased numbers of independent women.

For example, the results in 2014 shows that products and services meeting individual needs such as ’spa at home’ and ’nail salon (unique design for nails)’ has become more popular.

The survey results in 2014 clarifies that the number of internet and smartphone users has significantly increased among young generation, compared to those in 2012. The ownership ratio of smartphones has almost doubled to 80 percent of all respondents. 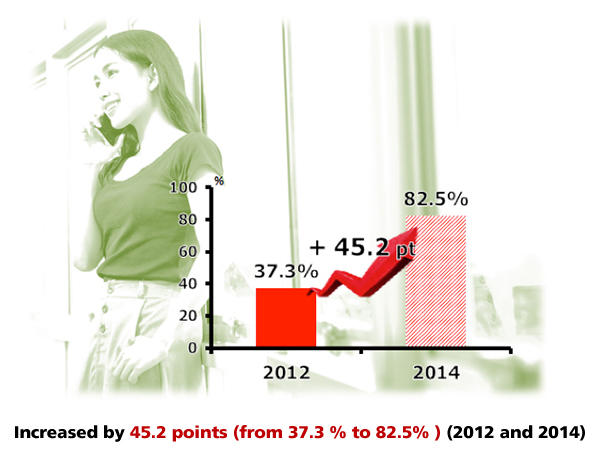 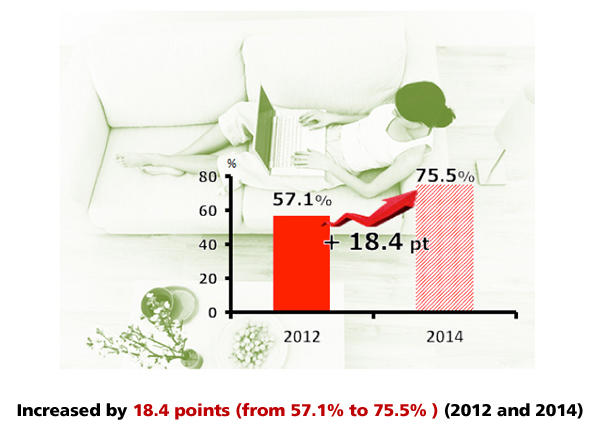 Vietnamese customers used to go to shops immediately in order to purchase products and services. Today, it is not until they acquire enough information via online that they go to shops for purchasing. Such a transition in purchasing behavior requires a new marketing strategy such as providing information via online interactive survey with customers.

For example, many restaurants popular among young generation offer coupons or discount tickets on information websites (e.g. Facebook, Zalo, Foodie, Tripadviser, and Hotdeal). Actually, such websites function as a communication tool between guests and restaurants.

For example, the survey results clarifies that many Vietnamese are interested in Japanese dishes when dining out. Not only Korean or Italian, but also Japanese dishes are very popular among them.

The results also show that the percentage of Vietnamese who tried Japanese dishes within the previous three months increased drastically and reached 30 percentage, an almost doubled value.

However, it should not be overlooked that ’high quality’ is not enough in Vietnamese market. What could make Japanese products even more attractive from Vietnamese women’s point of view? It would be ’fitting their needs (personality)’ that young female consumers value, and clear message that Japanese products could help them to express their originality. Communication would be also a key here. ’How to communicate’ and ’What to communicate’ could be flexibly adjusted to Vietnamese market, and ’communication story’ should express originality of each manufacturing company.

INTAGE Inc. publishes the "Asia Insight Report" based on independent surveys conducted in Asian regions in collaboration with overseas INTAGE group companies to identify trends in attitudes and behavior on a variety of themes.
Part 12 of the Report features the consuming and purchasing trend: Women in their 20s in Ho Chi Minh City.
This Report draws upon the results of the "Third Asia Insight Research,*2" which was conducted jointly by INTAGE Inc. and other overseas Group companies in July 2014.