Today, an increasing numbers of women in Bangkok study at higher educational institutes, and work for companies or enterprises.
White-collar jobs and the service industry are strongly preferred to bread and butter among women in Bangkok. There are, therefore, more female than male commuters in business districts in Bangkok.
Their clothing and makeup are, generally speaking, bright. It is popular to drop in at markets and shopping malls nearby during lunch breaks or after work.
While TV commercials have hit a peak, communication over the counter plays an important role as a resource of information among women in Bangkok.
Above all, women in their late 20s and 30s who have an approx. ten-year-long work experience and a steady income have such a leading purchasing power and strong decision-making power that they are essential as a target in marketing communication.
Also, women with career and income tend to marry later in Bangkok. An unprecedented Japan boom has accelerated so called ’Japanese Sections’ where customers can find exclusively Japanese products in supermarkets and shops.

1. Features: Getting married later and a higher self-consciousness as a member of Thai society 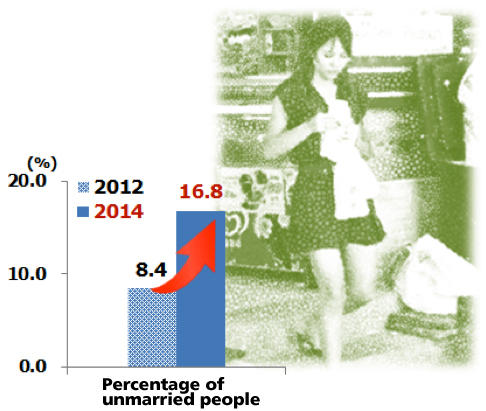 2. Attitude: Desires for satisfaction both professionally and privately

The survey results on the attitude of women in their 30s in Bangkok show their bilateral self-consciousness as members of family and society. While ’private life is more important than work’ gained the highest advance rate between 2012 and 2014, ’I want to be of help for other people and society’ and ’I want to gain status and fame’ also gained a certain advance rate. This implies that they have a higher self-consciousness as members of Thai society, compared to the survey results in 2012. 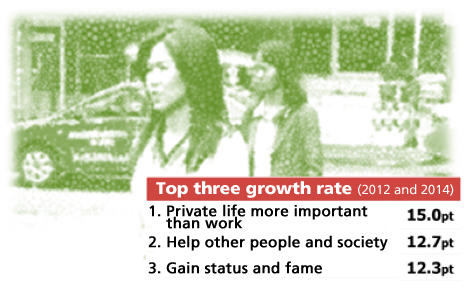 Rises in the percentage of their service usage and durables ownership show that the living standard among women in the 30s in Bangkok has been rising. For example, service and products for self-improvement such as ’nail salon’ (service usage) and ’tablet PC’ (durables ownership) have caught higher popularity.
On the other hand, usage of service ’cable TV’, durable goods ’flat-screen TV’ and ’air conditioner’ gained a certain growth rate, which could be interpreted that women in their 30s in Bangkok spend money to make the life with their family at home more comfortable. The demand for service and products to enrich both inner and outer beauty among women who has ten-year-long career and social status in Bangkok is believed to increase.

[Figure 3] Service usage and durables ownership: Women in their 30s in Bangkok (growth rate between 2012 and 2014) 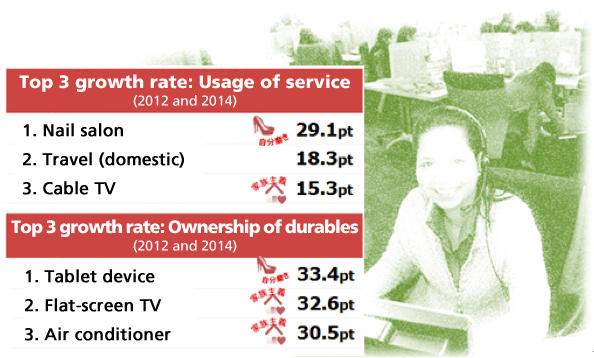 Good appearance is highly valued among women in Bangkok. In this point, the Thai market for personal care products in Bangkok is expected to significantly expand. People can find drugstores near markets and inside office complexes easily, and even supermarkets offer customers with wide varieties of personal care products in Bangkok.
According to the survey results, an increasing number of women in their 30s in Bangkok regard the information gained over the counter as the most reliable one, decreasing numbers of them gain information from TVs, flyers, and word-of-mouth. They do not buy personal care products just because certain product has high reputation in markets. What actually matters is whether certain product meets their individual need or not. They never fail to examine information from their own points of view. 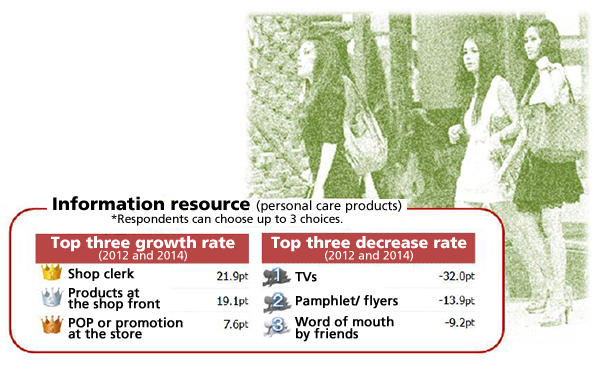 3. Japan: It is time to spread Japanese brand names among women in Bangkok.

The survey results show that Japanese cuisine won the largest growth rate in a ranking of ’Which country’s cuisine did you try in the last three months?’ The growth rate increased significantly by 44.2 points from 17.9% (in 2012) to 62.1%. Besides, Japan also featured first as a future travel destination among women in their 30s in Bangkok. Japan featured first in two segments!
As for personal care products, Thai brand names came first. Japanese brand names, however, turned out to be very popular among women in their 30s in Bangkok, coming second. The ranking shows a majority of the respondents would strongly prefer Japanese brand names to other countries brand names for their personal care products. 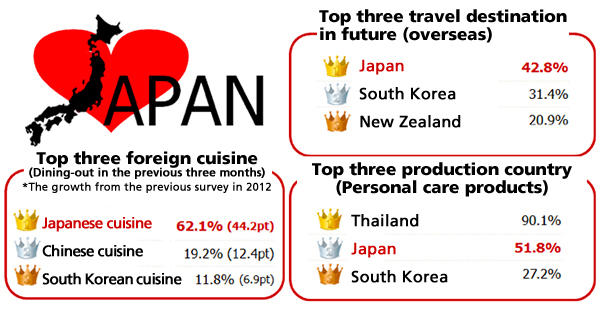 INTAGE Inc. publishes the "Asia Insight Report" based on independent surveys conducted in Asian regions in collaboration with overseas INTAGE group companies to identify trends in attitudes and behavior on a variety of themes.
Part 13 of the Report features the field survey in Thailand.
This report focuses on women in their 30s in the capital city Bangkok, and draws upon analysis of the results of the "Asia Insight Research,*2" which was conducted jointly by INTAGE Inc. and other overseas Group companies.