The average age in India is 26 years. It is one of the youngest countries in the world. Generally speaking, Indian society is said to be masculine and conservative. These days, however, an increasing number of women have work outside home (e.g. at companies and some other organizations), irrespective of marital status. Married women managing both household and work outside home are rapidly gaining financial and social independence these days. Indian Government offers various support, in order to encourage more and more women to learn at school, study at university, or work outside home.

Also, salary income earned by women enables them to put money aside constantly. Today an increasing number of women spend more time and money for self-improvement such as cosmetic products or clothes (in other words, enriching external) and lessons or information gathering (similarly, enriching internal), for the purpose of gaining higher ’social credibility’ for themselves.

High quality and reasonable price, however, do not guarantee strong support from women in Indian market. Successful sales in Indian market require adding something Indian (e.g. service or some elements) to original products. In other words, it is necessary to customize products to Indian specifications.

It is remarkable that ’social credibility’ marked a large growth rate (+28.7 point) compared to the results in 2012. This remarkable growth implies an increasing number of women regard self-development or continuing training for advanced knowledge or skill to lead to successful career and trust from the third parties.

Also, in general, the younger generations of women living in the city center is more interested in life outside home than the older generations used to be. To some extent, it could be attributed to the more stable politics and economy in India, and it causes younger women to have more active perspectives for their future as members of Indian society, rather than as members of their family. 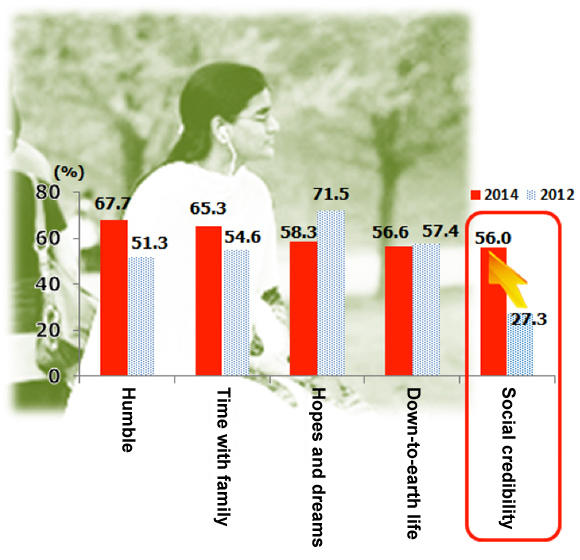 The most influential information resource when purchasing personal care products among women in their 20s is TV. As India is in the middle of developing, ’word-of-mouth’ still plays a very big role in Indian society. Moreover, the spread of Internet accelerated the usage of communication via SNS such as Facebook or Twitter. The percentage of the ownership of an SNS account has almost doubled since the last survey in 2012, and 43.0 percent of women in their 20s has an SNS account today.

Indian women in their 20s would strongly prefer exchanging word-of-mouth on SNS to exchanging directly in their conversation among family or friends. For example, certain online communities or groups play an important role as an information resource for varieties of activities. Also, it is remarkable that the ownership of an SNS tool ’smartphones’ recorded the third largest growth among women in their 20s. This implies that people search for information more actively than just being exposed to information receptively today in India. The ownership of smartphone is, therefore, estimated to keep rapidly rising, as it is an absolutely important tool for collecting information among that generation. 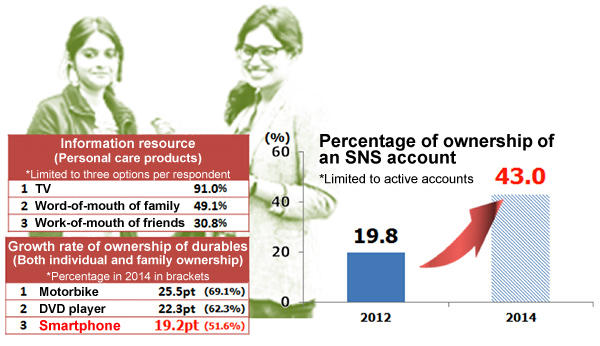 3. Customization of products: Something ’our own’

Respondents were asked to specify their favorite production country when purchasing five products (car, home electronics, processed foods, personal care products, and health care products). India gained the first prize in all five products, and showed its solid popularity among them. This means worldwide brand names or very high specifications do not always guarantee a success in Indian markets. In other words, India varies widely in social customs and social codes, and the deep understanding of Indian societies should be reflected in some way in products. Our survey results prove that customization of products (here, adding ’something Indian’ to products) is required to gain the trust from Indian women.

[Figure 3] Favorite production country when purchasing… (First and second prize): Women in their 20s in Delhi (2014)

The percentage of those who dined out in Indian Chinese restaurants in India in the previous three months has remarkably grown for the last two years. Indian Chinese cuisine seems to be fully integrated into Indian society after it is customized to meet Indian’s sense of taste.

[Figure 4] Dining out in Chinese restaurants: Women in Delhi (Within the previous three months) (2012 and 2014)

INTAGE Inc. publishes the "Asia Insight Report" based on independent surveys conducted in Asian regions in collaboration with INTAGE Group companies overseas to identify trends in attitudes and behavior on a variety of themes.
Part 14 of the Report features the field survey with special focus on women in their 20s in the capital city Delhi, India.
In this report, the details of women in their 20s in Delhi are analyzed, and the data here draws upon analysis of the results of the “Asia Insight Research,*2” which was conducted jointly by INTAGE Inc. and other Group companies overseas.