Report 18-Media Use in Purchasing Behavior in 4 Asian Cities

Product penetration and smartphone use were the factors in the process leading up to and after the purchase of deodorant products in 4 Asian cities, and differences in the length of this process were observed across cities.

The number of encounters with information contact points comprised an average of 8 to 9 steps in cities with the highest numbers, and the most of those steps occurs in stores and through television. However, in Ho Chi Minh City, with its relatively undeveloped public transport system, the active use of smartphones to gather and encounter information was inferred, and, consequently, the process length was similar to that in cities with their high product penetration: Bangkok and Jakarta.
In contrast, in Delhi smartphones are less widespread, and it was observed that there were still more opportunities for the non-digital method of word-of-mouth in direct conversations among family and friends/acquaintances to influence purchasing behavior.

The above results indicate that having an understanding of the Customer journey by each country and city is indispensable in formulating a media strategy for product promotion. As smartphones become more widespread, we can expect to observe information collection and encounters that transcends conventional media, such as television, radio, newspapers/magazines, and public traffic/outdoor advertising. Regularly and quickly assessing the diverse changes in purchasing behavior, accompanying the spread of smartphones, will be key in the future.

1. Length of the Purchasing Process

Our research involved separating the process from recognizing a product until purchasing it into three steps—awareness, consideration, post-purchase—and asking deodorant product users what kinds of information contact points they had through each of the steps and in what order they encountered them.

Out of the 4 cities, Jakarta had the highest number of encounters with information contact points (9.4), which was the total of all three steps from first recognizing a product until purchasing it. Ho Chi Minh, Bangkok, and Delhi followed at 8.9, 8.2, and 5.0, respectively. 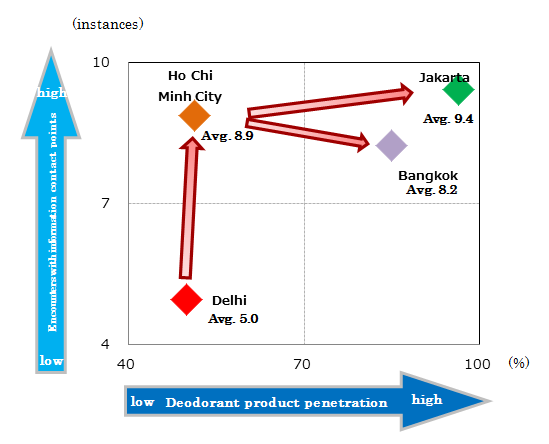 A breakdown of the media encounters reveals that encounters in stores and on the TV accounted for most of the encounters. Word-of-mouth engagements (speaking with family and friends/acquaintances) came next. In Delhi, where there is inadequate product penetration, although exposure through TV or stores is believed to be infrequent, more frequent encounters through word-of-mouth were found to be a characteristic of that city. There was a marked increase in word-of-mouth encounters after a purchase was made, which meant that there was significant communicative activity after purchases were made, while a non-digital method of communication is common there.

Encounters at stores were frequent among all 4 cities. In stores, encounters with store clerks were frequent in Ho Chi Minh City, and there were numerous POP encounters in Jakarta, suggesting the potential for active promotional campaigns in stores to influence the purchasing process.

[Table 2] Breakdown of Information Contact Points – By Rank (5% or more) in each City [Base: Deodorant product users] 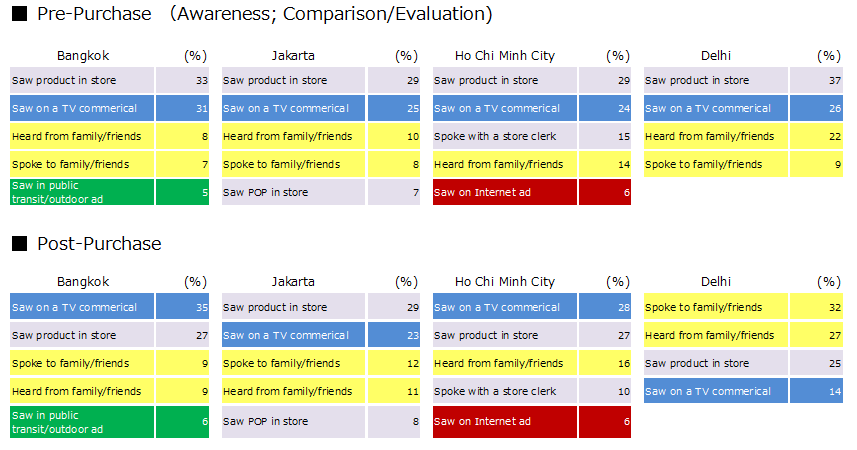 Smartphone use in Ho Chi Minh is almost at the same level with that in Bangkok and Jakarta. It can be inferred that even without a direct physical encounter with a conventional ad in a store, or on public transit or outdoors, people there encounter information which is sent to their smartphones, or actively seek out and collect information.

[Table 3] Smartphone Use [Base: Overall]

INTAGE Inc. (Headquarters: Chiyoda-ku, Tokyo, President and Representative Director: Noriaki Ishizuka) published the "Asia Insight Report" based on independent surveys conducted in Asian regions in collaboration with INTAGE Group companies to identify trends in attitudes and behavior on a variety of themes. Part 18 of the Report features " Media Use in Purchasing Behavior in 4 Asian Cities." This Report focuses on what kinds of media consumers encounter in the process leading up to and after the purchase of deodorant products in 4 different cities: Bangkok (Thailand), Jakarta (Indonesia), Ho Chi Minh City (Vietnam), and Delhi (India) , and draws upon analysis of the differences between each city as clarified by "Asia Insight Research,*2" which was conducted jointly by INTAGE Inc. and other Group companies.